If you’re travelling and not working you wouldn’t need more than a few days in Brisbane! There isn’t much to see, it is a big city and cheaper to live in than Sydney. There isn’t a beach here unless you want to drive an hour down to the Gold Coast or up to the Sunshine Coast which due to having company cars we could do this occasionally on our days off.

There is lots of nightlife here and great places to eat and although you don’t have a seaside view the views of the city skylines are still pretty cool!

We saw a fair amount of Australian wildlife whilst living in Brisbane as we visited both Australia Zoo (Steve Irwin’s) and Lone Pine Koala sanctuary both great days out!

Australia zoo is a lot bigger than the Koala sanctuary. If you decide to visit it make sure you watch the crocodile show, the zoo keepers put on a fantastic show! There is lots of options for interacting with the animals we chose to feed the giraffes 🦒 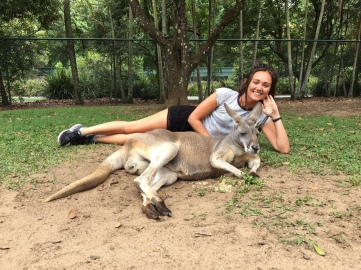 We saved the Koala photo for the Koala Sanctuary. Myself, Eden (our favourite french) and Siobhan visited together. We’d already seen Koala’s and kangaroo’s at Australia zoo so it was nothing too exciting for us but Eden feel in love with the Kangaroo’s i’m sure in the future he will become a zoo keeper.

You have to come to Australia and return with a Koala picture though don’t you?

We were in Brisbane when the Rugby League world cup was on, even though I have very little interest in Rugby it was great to experience a live rugby match and be within the atmosphere!

Find out more about my time spent in Sydney, a beautiful city surrounded by beaches. Having spent 3 months here now I outline here my favorite places to visit.

Find out more about my experience of work in Australia so far, my top tips for finding work and the variety of jobs I have experienced so far!

Find out more about my time in the beautiful whitsundays and my visit to Whitehaven beach, the second best beach in the world!